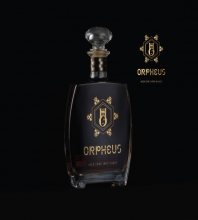 It took several organoleptic tests, tastings and analyses to be able to reach this successful "marriage" of flavors and aromas. The well-known alcoholic drink "Orpheus" of our company was the basis of Orpheus With Honey, which initially became a "body" with the wonderful honey from the flowers of the plant Erica manipuliflora, known as erici or pyrene. Then, after the aromatic muscat and the aged spirits of Orpheus brandy embraced the Greek honey, they were all transferred together for aging in a French oak barrel. It took nine months to be absorbed and incorporated all aromas of oak barrel. And somehow, this magical Greek Spirit came up, ready to enchant and leave premium impressions on anyone who tastes it !!